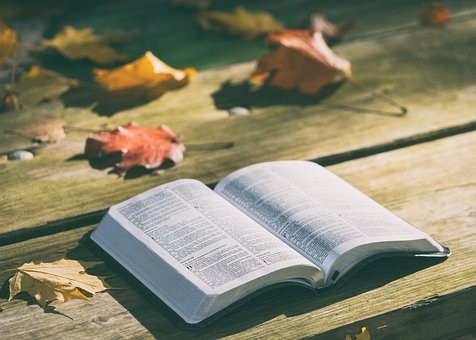 This month we continue on with the theme of reading Scripture with a daily systematic plan in mind.

The plan I utilize as I read through Scripture is the Lectionary found in the front of the Reformed Episcopal Book of Common Prayer.  In utilizing this plan, I am not suggesting this is the only way to read the Scriptures, but it is a plan that has worked for me and that I have found helpful. By using the Daily Lectionary, you will be reading through large sections of Scripture in a year’s time and connecting to the various books of both Old and New Testaments as well as their major themes.  Although the Daily Lectionary does cover every book of the Old Testament, it does not have you read through every chapter of every book of the Old Testament.

Jesus says this of Himself in John 5:39, “You search the Scriptures because you think that in them you have eternal life; it is these that testify about Me;”

As Jesus says these things, the Jewish religious leaders are arguing with Him since they don’t believe He is the promised Messiah.  Jesus goes on to make this statement about the spiritual condition of the Jewish religious leaders in John 5:45-47, “45 Do not think that I will accuse you before the Father; the one who accuses you is Moses, in whom you have set your hope. 46 For if you believed Moses, you would believe Me, for he wrote about Me. 47 But if you do not believe his writings, how will you believe My words?”

Jesus criticizes them not only because they reject His words and message, but even before that, they rejected Moses’ words and message which were about the Lord Jesus Christ.  They won’t listen because they have blinders on their hearts dismissing our Lord’s teaching about Himself.  In saying this, Jesus shows that the whole theme of the Old Testament is about His coming into the world to save us from sin and death by His life, death, and resurrection.

“VII. Of the Old Testament. THE Old Testament is not contrary to the New: for both in the Old and New Testament everlasting life is offered to Mankind by Christ, who is the only Mediator between God and Man, being both God and Man.”

The article goes on to say this about various parts of the Old Testament, “Although the Law given from God by Moses, as touching Ceremonies and Rites, do not bind Christian men, nor the Civil precepts thereof ought of necessity to be received in any commonwealth; yet notwithstanding, no Christian man whatsoever is free from the obedience of the Commandments which are called Moral.”

This explanation speaks of the moral law, the ceremonial law, and the civil law of the Old Testament.  This is a good example taken from Scripture on how to read the Old Testament in light of the New Testament.  The ceremonial law which included the animal sacrifices, the priesthood, the temple, and the annual religious festivals found its fulfillment in the death of Christ who suffered once for all for the sins of the world. (Hebrews 10:10-14)  We are no longer bound by or expected to participate in and follow these laws, practices, and religious festivals since Christ’s death on the Cross is the fulfillment of them.  The article next points to the civil law of Israel.  The Law includes all the civil laws which governed the elect nation-state of Israel once they were in the land promised to Abraham, Isaac, and Jacob.  There were various laws established in Israel as well as punishments for those who violated these laws.  For instance, it was a capital offense punishable by execution to worship idols, commit adultery, be disrespectful toward your parents, or work on the Sabbath.  I don’t know whether Israel ever consistently enforced these laws, but for our present purposes let us note that by the reading of the New Testament it shows that these civil laws are not required to be followed by civil governments. Israel was the only elect nation, not just a secular civil government, and that nation’s relationship with God has been fulfilled in Christ.  By saying that Israel’s relationship with God has been fulfilled in Christ, I mean that the Christian Church is the New Israel.  (Galatians 3:26-29)  There are instances in the New Testament where Christ and the apostles show that the OT civil law, and its punishments in particular, are not meant to be followed.  In John 7:58-8:11 a woman is brought to Jesus by the religious leaders who accuse her of adultery.  They urged Jesus to allow her to be stoned to death.  Jesus words to the religious leaders in John 8:7 were this, “He who is without sin among you, let him be the first to throw a stone.”  Eventually every person left who wanted to throw a stone because they knew they also had sinned in many ways.  Jesus was left alone with the woman.  He then said to her in John 8:10,11,
“‘Woman, where are they? Did no one condemn you?’  She said, ‘No one, Lord.’ And Jesus said, ‘I do not condemn you, either.  Go. From now on sin no more.’”