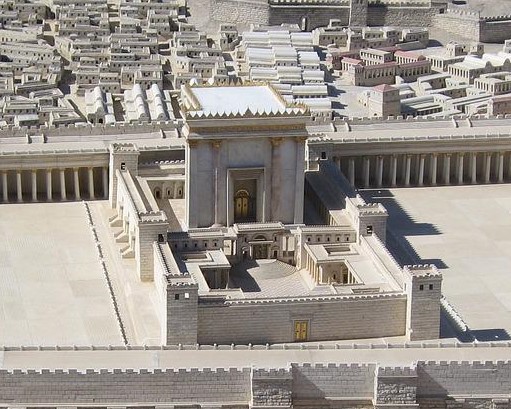 The Temple in Jerusalem is a vivid illustration of the closed-door policy between God and the people that existed during Old Testament times. The following was the basic layout of the Temple: 1) the Outer Court had the most access, 2) the Holy Place had less access, and 3) the Holy of Holies behind the curtain had virtually no access. The Day of Atonement was the only time access was allowed into the Holy of Holies and then only by the high priest. The Temple stood as a constant reminder of how little access God’s people actually had to God’s awesome presence.

Matthew 27:51-53 states, “51 And behold, the curtain of the temple was torn in two, from top to bottom. And the earth shook, and the rocks were split. 52 The tombs also were opened. And many bodies of the saints who had fallen asleep were raised, 53 and coming out of the tombs after his resurrection they went into the holy city and appeared to many.” As the curtain is torn from the top down, it is as the hand of God himself tearing apart the barrier between Himself and men, now allowing full access to the true Holy of Holies – God Himself.

What a shocking sight this resurrection must have been!  This event of saints from the Old Testament period being raised in tandem with the resurrection of the Lord Jesus is only mentioned in Matthew’s Gospel. Apparent from this passage is that these newly risen believers were raised from the dead because Christ conquered sin and death for us.  Easter Sunday celebrates the firstborn of all creation, Jesus Christ (Col. 1:15). God’s only begotten Son was not only the firstborn from Mary’s womb, but the firstborn from the tomb. A song sung in the past during the Easter liturgy says, “Christ is risen from the dead, trampling down death by His death, and on those in the tomb bestowing life.”

Jesus Christ is the Messianic door and gate “opener”. Until the resurrection of Christ, access by the nations into the presence of God was limited. In Matthew 28:16-20, the LORD who possessed “all authority and power” commanded His followers to go through the open gates to make disciples of “all” nations. The Son of God now holds the keys of death and hell and has opened the gateway to everlasting life. Now is the time to share the Gospel to those around us. It is only by the power of God through faith in Jesus Christ, His only begotten Son, that we can be redeemed from sin and death (Romans 1:16,17).